What Will 5G Mean?

At a recent dinner in SF hosted with Ericsson, agreement about the importance and gravity of 5G was near-unanimous. But questions abound- where will it arise first? What will it mean for the internet of things? Can we manage all that data? In December, Techonomy and Ericsson brought together a group of tech and telecoms leaders over dinner in San Francisco for a wide-ranging conversation about wireless technology. Two key questions were on the table: how big a change will 5G technology be for the world?; and will that help move forward the long-hyped internet of things, often called “IoT”?

The enthusiasm for 5G was diverse and broad. Asa Tamsons, Ericsson’s senior vice president and head of new businesses, said new forms of automation enabled by 5G will create opportunities for every industry. “It will change how we live and work,” she said, “but we will need to work together as a full business ecosystem to unlock all the potential.” Faraz Hoodbhoy, director of ecosystem development for ATT, said “The big deal about 5G is that it will democratize wireless technology even further and make it more accessible for more users.”

This new set of wireless standards will not just mean faster speeds for downloading videos and other familiar mobile tasks but will enable a diverse range of applications because devices will be able to connect in a variety of ways—at different speeds and bandwidths according to their needs. A 5G agricultural sensor, for instance, might connect only briefly and occasionally at low bandwidth, whereas a driverless car on the same network will need super fast connections with no delays to ensure it stays away from other moving vehicles.

Tim Lee, a Boeing technical fellow and the director-elect of the Western U.S. (Region 6) of IEEE, the global association of engineers, said 5G technology will enable many new applications still undreamt as of today, but that its innovations for humanity will come not just from the United States but increasingly from Asia and Europe.

Sean Mehra, chief strategy officer at HealthTap, which connects doctors and patients, predicted 5G would have a vast impact on fundamental human experiences, especially in healthcare, and in some cases mean the difference between life and death. “The speed of 5G will enable more precise robotic surgery, for example,” he said,  “and smaller, cheaper health sensors will go in our homes and on our bodies.” Gil Perez, head of products and innovation at SAP, added that manufacturing and logistics will also be substantially more efficient in a 5G future: “The intelligent enterprise will incorporate 3D printing, robotics, machine learning, blockchain, and the IoT, all running on 5G networks. All that will enable more efficient and considerably more environmentally-sustainable business processes.”

IoT, in general, did not command as much enthusiasm. Deployment seems to have been slower than expected and it hasn’t lived up to the hype, people felt. Raj Talluri, the general manager of the mobile business unit at memory chip giant Micron Technology, said people had predicted “unrealistic financial returns in the short run” from IoT without understanding how complex the technology landscape would be. John Suh of Hyundai said that IoT needs better regulations and policy in data privacy and ownership in order to advance. Even Rob Tiffany, Ericsson’s vice president and general manager for IoT in North America, said he is disappointed in the technology’s progress. “Customers are scared,” he said. “They hear IoT must be coupled with artificial intelligence in order to derive value. Nothing could be further from the truth. There’s tremendous value to be gained from even the simplest connected intelligence deployments.”

Simon Mulcahy, chief innovation officer at Salesforce, says his company takes a different perspective on IoT. It focuses not so much on the significance of “things” being connected as on the “dataset” of information enabled by the new variety of connected devices. “The data becomes much more insight-filled and massively reusable,” said Mulcahy.

There were strong opinions about the geography of innovation in the 5G era. Progress in China looked good. Europe not so much. Tamsons of Ericsson, based in Stockholm, said she was “deeply worried about the speed of deploying spectrum in Europe,” concerned that it “risks hampering competitiveness and economic development there.”Purva Rajkotia, the IEEE’s director of market insights and intelligence and an IoT expert, shared Tamsons’ concern about the pace of regulatory response. “For 5G to get real and successful,” he said, “regulators in the U.S., China, and elsewhere will have to play a critical role by quickly releasing spectrum and  opening it up for deployment.”

One theme that elicited overwhelming agreement was that the scope and breadth of what 5G and IoT will do to the world make it all the more urgent that deployment is handled in an ethical and responsible way. This group was acutely conscious of the new mood of digital caution that has been descending on tech. Said Jay Rogers, CEO of Local Motors: “We need a new ethical standard for how data should be protected.” And Elle Shelley, CEO of stealth startup Cobalt, got explicit about where we have to start: “Businesses have tricked consumers. Facebook isn’t free. People pay for it with data. The ethics conversation should start there.”

Interview with Verizon CEO Vestberg: It’s All About 5G

At a recent dinner in SF hosted with Ericsson, agreement about the importance and gravity of 5G was near-unanimous. But questions abound- where will it arise first? What will it mean for the internet of... 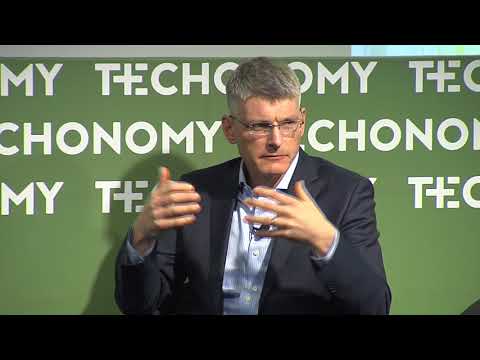 Session Description: What is 5G and why should we care? One of its inventors explains. The full transcript is below, while a PDF version is available here. Demystifying 5G    (Transcription by RA Fisher Ink) Kirkpatrick:...

Monitoring, metering, measuring, and controlling the world with the Internet of Things may mark a tipping point in combating climate change. Sensors monitor fugitive emissions of methane and other pollutants, smart grids help manage energy...