Rita McGrath on How Business Should Act Now

We are entering new and uncharted territory for business. What will consumer behavior look like after we all re-emerge? How can companies manage through such a disastrous “inflection point”? What does this moment mean for corporate digital transformation?

Few have a more informed and nuanced understanding of such questions than Rita McGrath, Professor of Innovation at Columbia Business School. Her most recent book is Seeing Around Corners. Don’t we all want to do that right now? McGrath recently joined the inaugural digital roundtable from Techonomy’s CDX forum for corporate digital leaders.

The conversation started with some historical context for the crisis, and a hint at what awaits us on the other side of COVID-19. McGrath says it will be “the end of the Second Gilded Age.” The term was coined way back in 1873 by Mark Twain and co-author Charles Dudley Warner in their novel “The Gilded Age: A Tale of Today.” At the time the U.S. was experiencing a period of unprecedented economic growth. and unprecedented inequality. The book expressed disdain for the impact of great wealth aligned with great power.  Amazon’s description says the book “satirizes greed and political corruption in post-Civil War America.”

Today McGrath sees similar issues, with a growing gap in wealth as citizens are increasingly dissatisfied with the status quo and workers are growing restive. Instacart and Amazon workers have gone on strike during the COVID-19 crisis, for example.  And government is starting to push back against corporate excesses, as we saw in the recently-passed California law extending employee classification to “gig workers”. McGrath says the end of today’s Gilded Age will set the stage for a new consumer economy and force a re-alignment of corporate strategy towards more social responsibility. Ultimately she foresees a new wave of innovation, founded on a healthier relationship between companies and their stakeholders. “People are waking up,” said McGrath, “to the fact the modern-day worker has no voice and that there is something fundamentally unfair about the fact that the billionaires are hiding in the Hamptons and the Amazon worker and the nurse are on the front lines risking their lives.”

As moderator, I asked McGrath if we could see an acceleration of digital transformation even if resources are constrained, with companies focused on simply surviving. She said companies can two do things at once. Finance professionals will have to focus on solvency and liquidity, while operational executives look after customers and start to engage in planning to prepare for the post-crisis future.

For companies that had not been investing in digital transformation much before the crisis, that has to end. McGrath recommends they seek to solve a single business problem or fix one thing that most in the organization agree is broken. From there, look for small wins across the organization and leverage open innovation principles. Moving forward, she advises companies to focus on achievable short-term innovations and eliminate wasteful “innovation theatre” investments and ambitious “moonshot” efforts.

I asked McGrath what the world will look like on the other side. “All core business assumptions are off-the-table,” she replied. “All consumer spending is up for grabs and consumers around the world will re-evaluate every dollar, every yen, and every euro that they spend… Even those not in financial distress will re-evaluate their spending – ‘Do I really need to go out to eat four times a week?’” Ultimately, McGrath believes consumers will re-evaluate almost everything about their lives and apply new habits and learned behaviors (for example cooking, using Zoom, or social distancing) to their own “new normal”.

McGrath reminded attendees who participated via Zoom that we are experiencing a once-in-a-lifetime event. She recommended former Intel CEO Andy Grove’s 1992 book Only The Paranoid Survive.  “It is a guide for getting through an inflection point,” she said. “The inflection point is upon us. Now we have to figure out what to do.” She continued: “Test a lot of assumptions. And as things become more clear, double down on…the right path.” 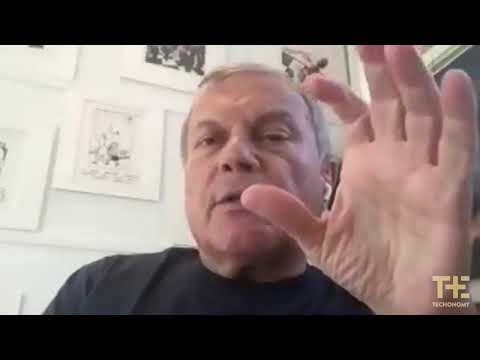 Martin Sorrell is one of our era’s great marketing and advertising leaders, but also something of a sage. His close attention to societal trends and the global economy makes him authoritative. So when he told... Companies Respond to the Crisis with Open Innovation