Gordon Bell, principal researcher at the Microsoft Research Silicon Valley Laboratory, talks with Techonomy founder David Kirkpatrick about his work on “lifelogging.” Read excerpts from the conversation below, or download the full transcript.

Kirkpatrick: Gordon has done so many things in the technology industry and shown an uncanny ability to stay in the present. He worked at the National Science Foundation and played a major role in the development of the early Internet itself. But particularly in the last decade, he’s really focused in on this issue of how we as individuals take advantage of technology. So I want to just ask you, as a way of getting at that, to describe the device that’s hanging around your neck, Gordon, and then we can maybe get into what you’ve been up to.

Bell: OK, this is a thing called a SenseCam, and it was invented or developed by Lyndsay Williams, who was at Microsoft Research in Cambridge. And I’ll say she was an inventor, and had the idea of having this camera that she’d wear all the time so that you would be able to say where did I put my glasses or my keys or something like that.

Kirkpatrick: Sow often does that take a picture?

Bell: Every 20 seconds. Then you upload the series, so you get this sort of frames of what you did during the day. Of course I look at it as a software sponge, because it takes so much software to get to do all of the things you would like to do.

Kirkpatrick: But the idea is augmenting memory, basically.

Bell: It’s augmenting memory, that the visuals are then a clue to what was going on then. And now there are people, particularly at Dublin College or Dublin City University that have worn it all the time. And then they’ve worked on the problem looking for patterns and summarizing and getting it down to—boiling all the data down to be more and more useful.

Kirkpatrick: But of course, the software challenge is how do you figure out what to make of all the data that you accumulate. And obviously, this kind of technology will go to video before much longer. Certainly I would prefer to have a video camera that helped me with my quite increasingly failing memory.

Bell: I find the GPS Trails as an interesting one of these things about your life. That is the fact that I can look at trails much more rapidly, a trail a day, of where was I, sort of this zigzaggy thing.

What I’ve done is build a transaction processing system for life. So every transaction, every phone call, every mouse click, every heartbeat is logged.

I guess the current epiphany is, oh my God, the data is not just in my hard drive, which we started out 10, 12 years ago, but my data is everywhere. Anything on Facebook, anything on LinkedIn, any statement, anything on Yammer, lots on Yammer—that’s all part of MyLifeBits. Things that I may want to—basically from an organizational standpoint—things that I may need to rapidly recall.

Bell: This is one of the devices. Then I’ve got a body strap here, and then that’s connected to a device here. This is a program that runs heart rate variability. So I couldn’t resist the opportunity to take the data here about this to see how my heart rate—how much stress I felt I was under.

Kirkpatrick: Do you think that in a sort of quantified self, contemporary manner you are sort of taking small steps towards the convergence of man and machine that Ray has talked about over the years; or what are you heading towards?

Bell: Well, in this case, I think we’re heading to building a set of tools that really will help everybody, anyone who—particularly anyone with a chronic problem—to be able to diagnose and affect what they do. Can Lifelogging Devices Augment Our Memories? Venturing Out with Memoto’s Lifelogging Camera 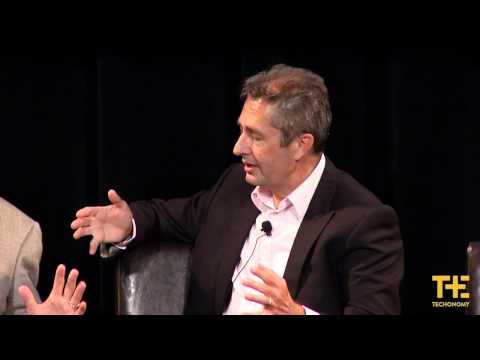 Using Quantified Self Tools to Ensure Workers Are Engaged