Richard L. Fruehauf was named vice president – strategic planning and corporate development in April 2018 and advanced to senior vice president in March 2019.  Effective Jan. 1, 2020, he has been appointed senior vice president – strategic planning and chief strategy & development officer.  In this role, he is responsible for creating and driving U. S. Steel’s strategy to achieve profitable growth, with a focus on safety, quality, delivery, and cost to achieve three critical success factors: move up the talent curve, move down the cost curve and win in attractive markets.  He also has responsibility for developing policy and methods that will support U. S. Steel’s future by aligning business and organizational opportunities.  Mr. Fruehauf has executive responsibility for the following organizations: Strategic Planning and Business Development, Governmental Affairs, and Environmental Affairs and Sustainability.

Mr. Fruehauf has also practiced law with Alcoa, Inc., Cohen & Grigsby, P.C. in Pittsburgh and Covington & Burling in Washington, D.C.  Earlier in his career, he served in national security positions with the U.S. Department of State, the U.S. Arms Control & Disarmament Agency, and the Department of the Navy.

A native of Pittsburgh, Mr. Fruehauf earned a Bachelor of Science degree in foreign service from Georgetown University, and a Master of Public Policy degree from Harvard University’s Kennedy School of Government.  He received his law degree from the University of Virginia School of Law. 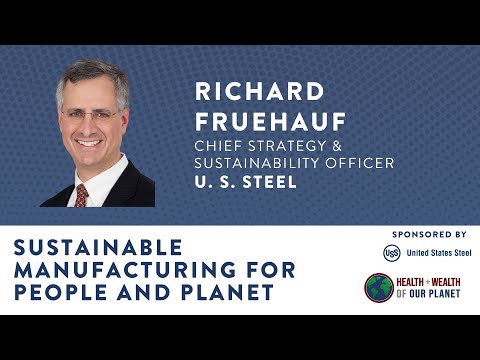 Sustainable Manufacturing for People and Planet