and environmental innovations. In 2021, he helped establish the company’s goal of achieving carbon

neutral operations globally by 2040, which will focus initially on investments in three priority areas:

With a background in engineering, Jackson helped envision and pioneer the implementation of hybrid and electric vehicles in the FedEx fleet as well as the market for commercial EVs overall. He was also instrumental in successfully securing the first-ever national fuel economy standards and greenhouse gas requirements for commercial vehicles. Additionally, he championed the first FedEx solar energy system in 2005—which was California’s largest corporate rooftop array at the time of its inauguration—and has overseen the growth of on-

site and off-site solar energy generation to dozens of FedEx facilities worldwide in the years since.

Jackson’s decades-long sustainability leadership at FedEx has been recognized in the transportation industry and beyond. In 2022, Jackson was named to Constellation Research’s inaugural ESG50 list of top environmental, social, and governance executives championing pragmatic ESG strategies. Jackson was previously named one of the top 15 sustainable business executives on Twitter by British media outlet The Guardian, as well as recognized as a “Sustainability All-Star” by Green Fleet Magazine. Jackson is currently a member of the Keystone Policy Center’s Board of Trustees, executive committee, and Energy Board. He also serves on the advisory board of the Center for Energy, Development, and the Global Environment (EDGE) at the Duke University Fuqua School of Business. Additionally, he has served as environmental juror for the Heinz Awards and is a board member of Shelby Farms Park Conservancy. 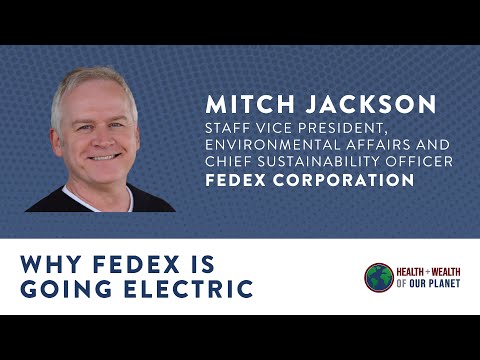 Why FedEx Is Going Electric with Mitch Jackson