For more than a decade, Mark has offered advisory support to high-tech, semiconductor, and industrial companies. Working with executives to tackle their biggest challenges in strategy and operations.

Mark believes passionately in the impact of the internet of things, digital and analytics in shaping the next level of productivity, wellbeing and innovation for our clients and society broadly. He is committed to partnering with clients to delivering on this goal and focuses his client activities in these areas. He brings a combined experience of working deeply with technology companies in hardware and software along with experience across industrial sectors on the application of technology. These combined experiences are married in his leadership of our work in IoT, analytics and digital.

Examples of his work include:

Mark is deeply interested in the connections between the physical and digital world. He has led major cross-industry research efforts, including a joint collaboration with the Global Semiconductor Alliance in 2015. A steering committee member for recent McKinsey Global Institute research on the topic, Mark publishes frequently. His recent interests are in the intersection of IoT with machine learning and artificial intelligence (AI).

Along with his consulting expertise, Mark has twice built and helped lead early stage companies. In 2000, he was part of the team that developed the first mobile commerce platforms for cellular operators. And in 2010, he took a leave from McKinsey for a two-year role as head of strategy and later senior vice president of commercial operations for Amyris, a renewable-products company. Mark earned an MBA from Stanford University and has both undergraduate and masters degrees in engineering from the University of Cambridge. 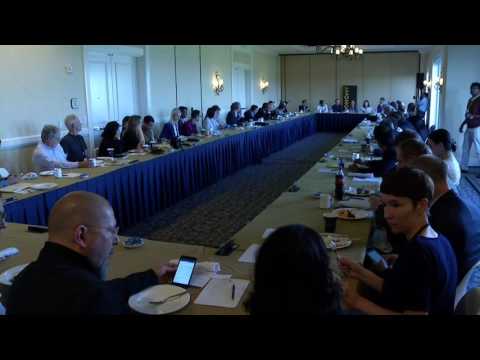 Our homes, industries, livelihood, toys, robots, and even our wars are being shaped by rapid advances in AI. How do we ensure that the resulting systems connect these advances equitably to the benefit not just...

Digital Transformation, IoT and the Future

Session Description: From the sewers below our cities to the roads and buildings above, the depth of the ocean to outer space, be it our genome or our micro-biome– how much will the Internet of...