Marc Benioff is the Chairman and CEO of Salesforce, which he co-founded in 1999.  Under Benioff’s direction, Salesforce a software as a service (SaaS) company that distributes business software on a subscription basis, has grown from a groundbreaking idea into a publicly traded company that is the leader in enterprise cloud computing. Benioff is the recipient of many awards for pioneering innovation, including the 2007 Ernst & Young Entrepreneur of the Year. In 2000, he launched the Salesforce.com Foundation—now a multimillion-dollar global organization. Most recently, the San Francisco Business Times named Benioff “2009 Executive of the Year.” Salesforce has received a Wall Street Journal Technology Innovation Award, has been lauded as one of BusinessWeek’s Top 100 Most Innovative Companies, was named number 7 on the Wired 40, and was selected for the past two years as a Top Ten Disrupter by Forbes. 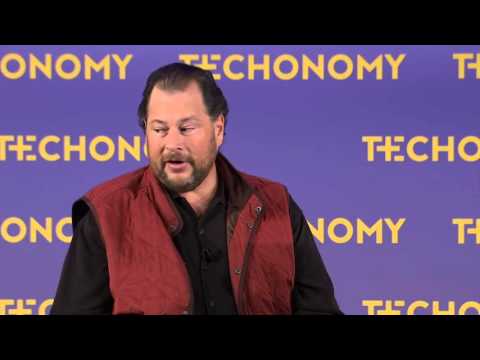 Customer Connection is the Heart of the Internet of Things The CEO of Salesforce joins one of the company’s top engineers (himself an industry legend) to discuss why serving customers well will increasingly involve a...

Kirkpatrick: Mark and Sue, please join me onstage.  Sue Desmond-Hellmann is CEO of the Bill & Melinda Gates Foundation, which is the largest pool of capital ever assembled for philanthropy. Before being at the Gates...

A Conversation with Marc Benioff

Kirkpatrick: Marc Benioff is our closing guest, somebody who I’ve known for a fairly long time. Long enough that he didn’t have any hesitation, somewhat like Weiner only more so, yesterday, telling me how I need...