Dr. Cynthia Breazeal is an Associate Professor of Media Arts and Sciences at the Massachusetts Institute of Technology where she founded and directs the Personal Robots Group at the Media Lab. She is also founder and Chief Scientist of Jibo, Inc. She is a pioneer of Social Robotics and Human Robot Interaction. She authored the book Designing Sociable Robots, and she has published over 100 peer-reviewed articles in journals and conferences on the topics of Autonomous Robotics, Artificial Intelligence, Human Robot Interaction, and Robot Learning. She serves on several editorial boards in the areas of autonomous robots, affective computing, entertainment technology and multi-agent systems. She is also an Overseer at the Museum of Science, Boston.

Dr. Breazeal is recognized as a prominent global innovator. She is a recipient of the National Academy of Engineering’s Gilbreth Lecture Award and an ONR Young Investigator Award. She has received Technology Review’s TR100/35 Award, TIME magazine’s Best Inventions of 2008, and has been honored as finalist in the National Design Awards in Communication. Her work has also won numerous best paper awards at top academic conferences. In 2014 she was recognized as an entrepreneur as Fortune Magazine’s Most Promising Women Entrepreneurs, and she was also a recipient of the L’Oreal USA Women in Digital NEXT Generation Award. The same year, she received the 2014 George R. Stibitz Computer & Communications Pioneer Award for seminal contributions to the development of Social Robotics and Human Robot Interaction. 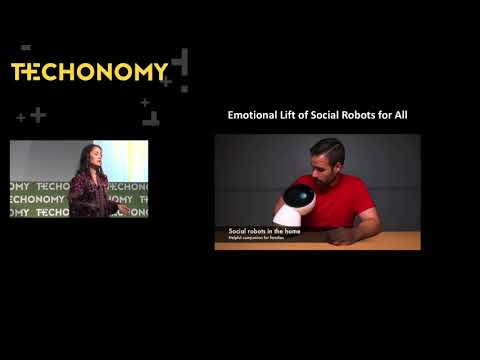 Cynthia Breazeal on The Personal Side of Robots

Session Description: Meet Jibo, “the first social robot for the home who looks, listens and learns.” The transcript can be found below, with a PDF version available here. The Personal Side of Robots (Transcription by RA...