In the future, everyone on Earth will have ubiquitous access to outer space. That might seem to be a bold statement or to border on science fiction, yet a glance back in time at the influence and trajectory of technology in our lives makes it seem almost inevitable. The nascent commercial space industry is reliving the exact same pattern seen during the late 20th century computer revolution. The author display a Nanosatisfi CubeSat.

In the future, everyone on Earth will have ubiquitous access to outer space. That might seem to be a bold statement or to border on science fiction, yet a glance back in time at the influence and trajectory of technology in our lives makes it seem almost inevitable.

Just 30 years ago, access to a computer was limited, elitist, and expensive. Today, computers are ubiquitous, inexpensive, and for everyone. With programs such as One Laptop Per Child and the growing global use of smartphones, even people in developing countries view computing and access to the Net as a necessity, even an economic right.

In just a few decades computer technology has radically transformed societies, whether by providing turn-by-turn directions to pedestrians strolling city streets or by enabling anyone to send money via SMS to a remote African village. No one could have predicted in the 1980s how dramatically different our lives would be today thanks to computers.

Now that 30-year story is being replicated in space with a more breathless timeline and potentially more dramatic transformation. Access to space used to be elitist, wildly expensive, and limited to governments and a few large corporations. Now, nanosatellites and companies like NanoSatisfi, NanoRacks, and SkyBox are transforming space access the way personal computers made the mainframe computer obsolete, kicked off the modern technological era, and radically altered society.

Just as Internet access now gives a front row seat to anyone who missed out on the first computer revolution, nanosatellites are bringing space exploration to the masses.

Nanosatellites are surprisingly tiny (as small as 10 cubic centimeters), cost less than $1

million to build and launch into space, and are available to anyone. The first Kickstarter.com satellite project went online in early 2012, and there have now been dozens of projects that empower individuals to collect data and pictures from space.

My organization, ArduSat.org, put the first two community funded satellites in space. With a number of other organizations in this field, including Arkyd and pioneers like Tim Debenedictis, ours is at the forefront of providing ubiquitous access. If you were awed and inspired by the movie “Gravity,” consider the even greater possibilities of individualized satellite access for entertainment, education, convenience, and a myriad of practical applications. Nanosatellites are bringing space into everyday life.

A question I get all the time is, “What’s the killer app for personal satellites?” When I was in high school in the early ’80s, the fully unimaginative consensus was that the mind-blowing and need-to-have reason for a personal computer was kitchen recipe storage. Really.

That is a stark reminder of just how small-minded humans can be when first introduced to radically transforming technologies. In fact, I challenge the notion that anyone can yet answer the killer app question for nanosatellites and space. Satellite use will mature and morph based on the ingenuity of individuals interacting with each other and society as a whole.

All that any one of us can do is imagine possible nanosatellite uses and share them with each other while we watch the industry evolve.

My vision of the future is one where:

* I don’t ever again get snowed in at the top of a mountain in August because of a faulty weather prediction due to lack of data about weather and our planet.

* We have accurate models about climate change, drought, and other natural disasters like earthquakes or tsunamis.

* We know exactly how many endangered animals are on land and in the ocean, and will see in real time who is illegally fishing in protected waters.

* We will be able to warn ships in real time of piracy or collisions—events that still happen on a regular basis.

* Satellites warn us about Near Earth Objects like the one that hit Russia recently, and individuals replicate the billion-dollar missions of Keppler and Hubble to make new discoveries about the origin of the universe.

* Students use a satellite every single day to learn about space and science rather than using pencil and paper.

In the end, no one can predict how ubiquitous individual access to satellites will transform our lives, and no one needs to. The important thing is that we now have the platform. One can either sit back and watch the show or jump in early and be part of the community that helps to shape the second technology revolution of a lifetime.

Peter Platzer is a high-energy physicist and a graduate of the International Space University’s master’s program. In 2012, he started NanoSatisfi to make space exploration available to everyone. He will speak about nanosatellites at the Techonomy 2013 conference, Nov. 11-13. Follow conversations about the event @Techonomy and #Techonomy13. Peter Platzer is CEO of Spire. He co-founded the company in 2012 with a vision to provide satellite-powered data from any location on earth. Platzer is now regarded as one of the pioneers in launching small form factor satellites into space and was named a White House Champion of Change in 2013.

Prior to launching Spire, Peter trained at CERN and the Max Planck Institute before turning to business with the Boston Consulting Group in Germany, Singapore, and Thailand. After attending Singularity University’s inaugural Executive Program in 2009, Platzer decided to leave finance to focus on high frequency and high accuracy data in space. He interned at NASA Ames’ Space Portal and in 2012, graduated with an MSS from the International Space University.

Peter received an M.S. in Physics from the Technical University of Vienna and an M.B.A. from Harvard, where he was a Baker scholar. He also currently serves as a Career Coach at Harvard Business School. 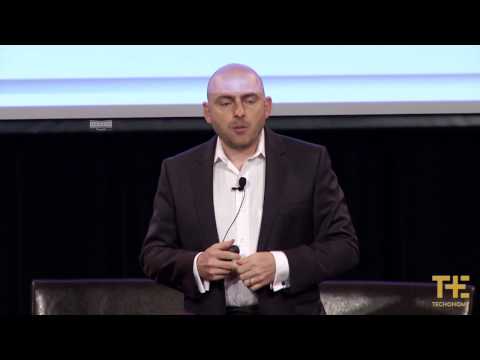 The Internet of … the Universe

Peter Platzer, CEO of NanoSatisfi, wants the public to revise how it thinks about satellites. Platzer explains that the satellites people normally think of—big, bulky, exorbitantly expensive, and reserved for the military and government—are in...