Tyson was chairman and CEO of Kaiser Permanente, one of America’s largest healthcare companies. He was also deeply committed to the idea that business and tech have a responsibility to drive social progress. On Nov. 10, he suddenly died. At Techonomy, we’re saddened by the sudden death of Bernard J. Tyson, who served for much of the last decade as chairman and CEO of Kaiser Permanente, one of the largest and most important healthcare companies in the United States. Tyson died Sunday at 60 years old, apparently in his sleep.

In many ways, he was the quintessential Techonomist: a strong believer in the idea that business and technology have a responsibility to drive social progress. In fact, he twice spoke at Techonomy’s conferences –in 2015 and 2016.

His trajectory was remarkable: he grew up in the San Francisco Bay Area, the son of a minister and a homemaker, with dreams of becoming a doctor. He earned degrees in business and healthcare management before joining Kaiser Permanente as an intern. He ascended into various management roles before being named CEO in 2013.

Kaiser Permanente serves nearly 12 million Americans, and in many ways it’s the model for the future of healthcare in this country. That’s because it combines, in one organization, both health insurance and the provision of care. Its incentives are aligned to keep people healthy. Tyson led the company through a period of profound growth and change—including digital transformation that gave doctors powerful tools to provide remote care to patients on everything from diabetes to cancer. He led the company through the Affordable Care Act’s implementation. He took a remarkably wholistic view of the healthcare industry’s role in society. That’s why, in 2017, he was named to Time Magazine’s list of the world’s 100 most influential people.

It’s worth noting that Tyson was one of the few African-Americans to reach a Fortune 500-sized company’s C-suite. In keeping with the new generation of black corporate and government leaders, he was unafraid to directly discuss diversity/inclusion issues and the persistence of racism. For example, after the 2014 fatal police shooting of Michael Brown – a young black man in Ferguson, Missouri—Tyson published a LinkedIn post headlined, “It’s time to revolutionize race relations.” Tyson wrote: “You would think my experience as a top executive would be different from a black man who is working in a retail or food service job to support his family. Yet, he and I both understand the commonality of the black male experience that remains consistent no matter what the economic status or job title.” Even during the weekend before his death, Tyson spoke at AfroTech, a conference and community designed to elevate and empower black people in tech.

Here are some key takeaways from Tyson’s Techonomy appearances:

1. On having a wholistic view of healthcare:

“In terms of social determents of health, the way we think about it inside of Kaiser Permanente is: About 40% of a person’s health is determined by social behaviors. What you eat, smoke, drink—all the things we have the freedom of choice to do. About 20% is based on genetics. Another 20%, we project, is based on where you live. And then the last 10% is based on healthcare. Why should we just stay in the lane of healthcare, when that has a very limited impact on a person’s health? That’s why we have farmer’s markets all over the country. In communities that lack grocery stores, we’ve been promoting fresh fruit and vegetables. We have relationships with farmers, and together we provide fresh fruit and vegetables.”

2. On the American healthcare system’s structure:

“We still need to redesign the infrastructure of the healthcare system, of how it gets paid. And that fee-for-service model…. It incents more procedures being done. So clearly, I would be a strong advocate that we need to continue, not necessarily for the whole industry to go my way with capitation [fixed payments based upon the number of patients served]. But there are models out there where you start to realign incentives, and you force the industry to work with itself to create that kind of alignment of incentives like we have inside of the Kaiser Permanente model. So, a physician inside of Kaiser Permanente doesn’t get rewarded or penalized if they pick one access to care versus the other. So, we don’t get more money by having more patients in our hospitals. And we don’t lose money because of that.

The second thing is to continue to reward the focus on prevention and early detection….In the future people will be having medical devices and we’ll have a warning system that will say, ‘Your body is dehydrating, your blood pressure is going down, you need [take a certain medicine].’ So, a system that would incent me to invest in the technology and everything to keep you healthy, to tell you before you land in my hospital that you are deteriorating and now we need to intervene, is what this economic system would need to motivate, for this industry to keep moving forward towards the outcomes that we use now.”

3. On innovating in the healthcare system:

“The healthcare system in this country is fundamentally flawed, with all its greatness. The healthcare system has been built on a model of intervention…. It’s fundamentally designed so that you come to us for the doctor visit, prescriptions. We’re turning that upside down—with secure e-visits with your doctor. With telehealth, I can go on my iPad and talk to my doctor. Think about the senior population that may have an appointment to see a doctor, who only wants to have a visual look at you. With high-definition technology, you can do that.”

“With technology comes the enhanced obligation of keeping that information as secure as possible. I spend as much time worrying about, and investing, in privacy as I do about the advancement of the technology. People are as concerned about their medical information getting into the wrong hands than they are about their credit information. You can cut off a credit card. You can’t cut off your DNA, or who you are. Now, in the healthcare industry, with the sophistication and level of information gathered on individuals, it requires an even greater obligation to do everything possible to keep that secure.”

Kirkpatrick: The next is really a conversation with two great healthcare leaders about what is happening in healthcare and how our politics and our policy need to evolve to accommodate it. Bernard Tyson, who is... 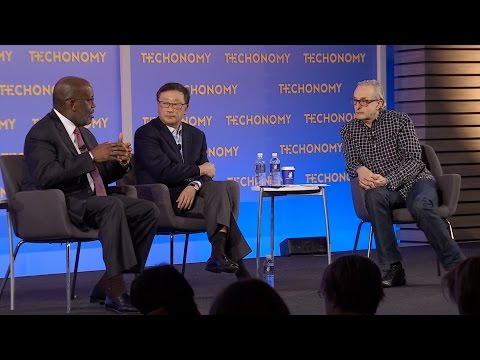 Optimus Prime: The CEO As Transformer: CEOs today must lead creatively, have as much EQ as IQ and thrive in a frenzied, revolutionary atmosphere.  Everything about rapid change is anathema to traditional best practices. Today,...

Tyson was chairman and CEO of Kaiser Permanente, one of America’s largest healthcare companies. He was also deeply committed to the idea that business and tech have a responsibility to drive social progress. On Nov....

Tyson was chairman and CEO of Kaiser Permanente, one of America’s largest healthcare companies. He was also deeply committed to the idea that business and tech have a responsibility to drive social progress. On Nov....